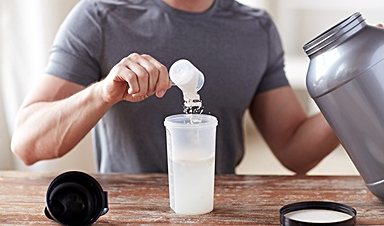 Lean mass, vastus lateralis myofiber-type–specific, cross-sectional area, satellite cell content, and myonuclear addition were assessed before and after the intervention. PB and the pooled protein treatments (PB+WP) exhibited a greater whole-body lean mass %change compared with MD (P = 0.057 for PB) and (P = 0.050 for PB+WP), respectively. All treatments demonstrated similar leg muscle hypertrophy and vastus lateralis myofiber-type–specific cross-sectional area. Increases in myosin heavy chain I and II myofiber, satellite cell content and myonuclei content were also detected after the intervention for the three groups. Authors concluded that protein supplementation during resistance training has a modest effect on whole-body lean mass as compared with training without protein supplementation (ingesting only carbohydrates) and there was no effect on any outcome between protein supplement types (blend vs. whey). According to the authors’ interpretation, both protein supplements did not enhance resistance exercise–induced increases in myofiber hypertrophy, satellite cell content, or myonuclear addition in young healthy men. Authors suggest that as long as protein intake is “adequate”, muscle growth and function will not be influenced by protein supplementation. Even though the previous results are well supported by the statistical analysis, the following points need to be considered:

In summary, results from the two commented studies indicate that ingesting protein after training would slightly optimise some aspect related to muscle mass gain. Different from what authors conclude, when considering the conducted methodology, even though statistical differences were minimal, from the practical point of view the effect of consuming proteins (Blend and Whey vs. carbohydrates) should not be considered as “non-influential”.